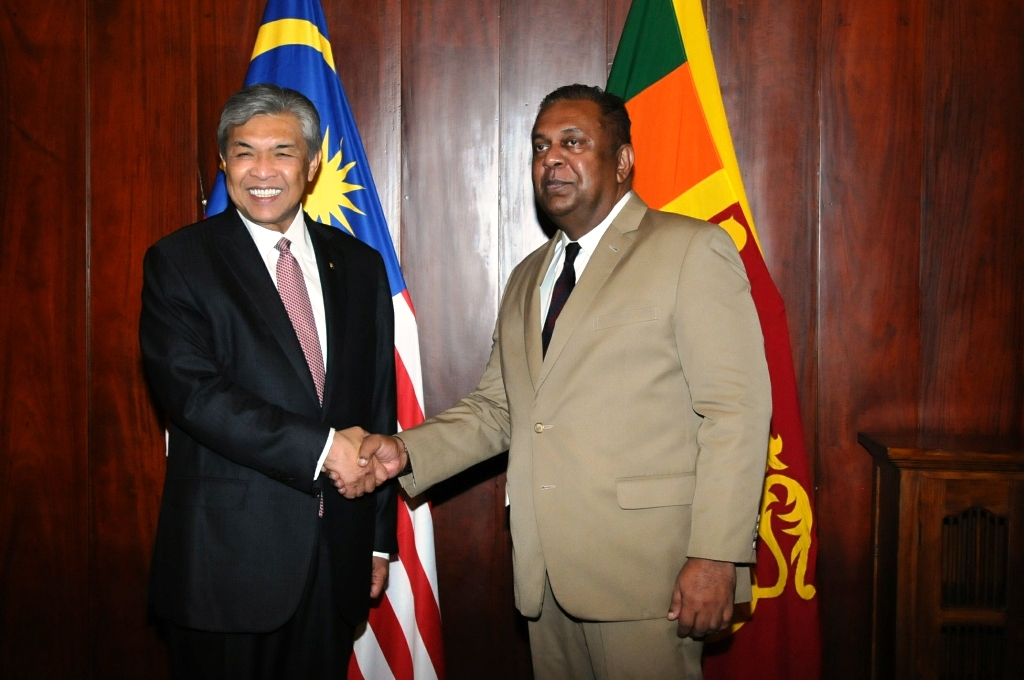 The Deputy Prime Minister and Minister of Home Affairs of Malaysia Dato Seri Dr. Ahmed Zahid Hamidi who is on a two day official visit to Sri Lanka met with Foreign Minister Mangala Samaraweera, today (22) morning at the Foreign Ministry.

Recalling the long standing friendship between the two commonwealth countries at their hour long meeting, the Deputy Prime Minister and the Foreign Minister exchanged views on a number of matters of bilateral importance, and in particular, cooperation in trade, tourism, education and the employment sectors.

As one of the biggest investors in Sri Lanka, Minister Samaraweera invited the Malaysian side to be more involved in development projects, including in the Hambantota Economic Zone and Colombo Port City project. The Deputy Prime Minister stated that the Malaysian side would consider facilitating a trade mission to have an in-depth study on potentials in this regard. He also stated that he would encourage fellow Ministers to visit Sri Lanka with a view to familiarize with the ongoing projects in Sri Lanka and seek stronger ties in potential areas of cooperation.

The Deputy Prime Minister emphasized the need to encourage youth exchange programmes between the two countries and assured that the Youth Minister of Malaysia would be asked to follow up with Sri Lanka side to arrange youth leaders exchange programmes particularly at the University level. Minister Samaraweera welcomed the idea and said that he would be happy to facilitate such programmes.