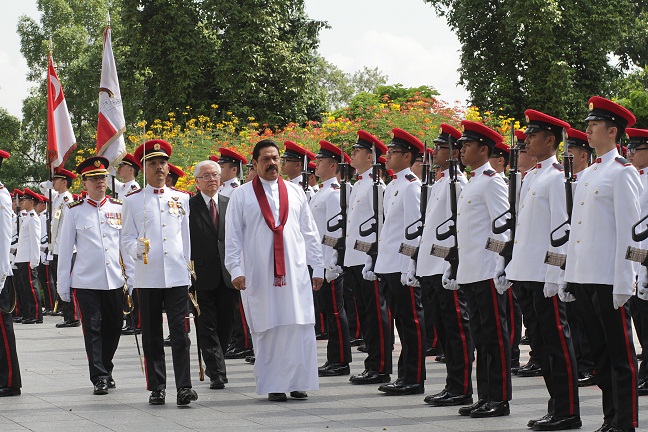 Sri Lankan delegation led by the President and the First Lady were received cordially by Singapore President Dr. Tony Tan Keng Yam and Mrs Tan  at the Istana and a guard of Honour was accorded to the President by the Singapore army. At the state banquet hosted in the honour of President Rajapaksa, President Tan, in his speech, stated that Singapore will continue to support Sri Lanka in its developmental efforts as the country embarks on its process of rehabilitation, reconciliation and growth. He said, “Today, Singaporeans of Sri Lankan ancestry have done very well in areas ranging from education to medicine to law. They continue the tradition set by the early pioneers, contributing to the development of Singapore's economy, culture and society". President Tan further stated, “With the end of the conflict in 2009 and the return of peace, Sri Lanka is perched on a new cusp of development and growth. I understand that 2011 was a record year for visitor arrivals- with tourists flocking once again to your beautiful beaches, historic temples and heritage monuments”.

During the visit, President Rajapaksa took a tour around the National Orchid Garden at the Singapore Botanic Gardens. The Dendrobium Mahinda Shiranthi, a new and rare orchid hybrid, was named after President Mahinda Rajapaksa and First Lady Shiranthi Rajapaksa in honor of their visit to Singapore.
Prime Minister of Singapore, Lee Hsien Loong called on President Rajapaksa and both leaders witnessed the signing of a memorandum of understanding on investment cooperation between the Board of Investment of Sri Lanka and the Singapore Business Federation. The MoU was signed by the Secretary to the President, Lalith Weeratunga on behalf of Sri Lanka and the Chief Executive Officer of Singapore Business Federation, Ho Meng Kit on behalf of Singapore. Singapore's Minister for Defence, Dr Ng Eng Hen also called on President Rajapaksa.

During his visit, President Rajapaksa was invited as chief guest at a closed door session by the Institute of South Asian Studies. He visited the Marina Barrage and the Singapore Air Show 2012 and also took part in a briefing by the Ministry of Community Development, Youth and Sports on policies relating to community relations and social harmony.