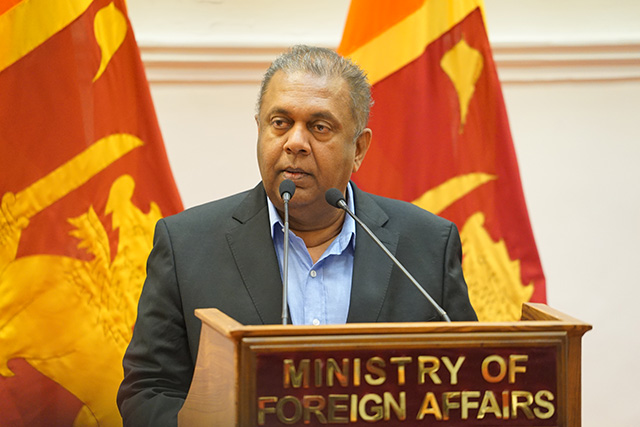 Today is Human Rights Day, as you know. And as in the past, Sri Lanka will join the countries of the world in commemorating this important event. But this year, Sri Lanka’s commemorations will not only be symbolic – it will also be substantive. So I am very pleased to announce that Sri Lanka’s Permanent Representative to the United Nations, will today, this morning in New York, in fact, will be signing the International Convention on Enforced Disappearances.

As you are aware, Sixty-seven years ago, in 1948, as the world was recovering from the unspeakable horrors of the Second World War, delegates from around the world convened to adopt the Universal Declaration of Human Rights, affirming every person's right to liberty, equality, and justice under the law.

In commemorating that event, 10th December, is celebrated internationally as ‘Human Rights Day’.

And Today is a special day for us in Sri Lanka as well. It is the first Human Rights Day since the January 8th Presidential election and Rainbow Revolution and the launch of an era of consensus-based politics under the leadership of President Maithripala Sirisena and Prime Minister Ranil Wickremesinghe.

But, on the 8th of January, we changed all that. The people of this country, upholding the best traditions of democracy, used the power of the ballot to vote for change and through that ballot, t he people of Sri Lanka acknowledged that each and every human being, not only in this country, but all over the world, irrespective of race, creed, gender or income level – are bound by common and inalienable rights that we all share as human beings.  By just this singular act alone, Sri Lanka took the world by surprise and captured the attention of the world community. By repeating this feat on the 17th of August again, the people of this country, together with the Government, have undertaken to travel on the path of establishing good governance, rule of law, and human rights, including taking steps for reconciliation, and non-recurrence – which we believe are essential ingredients if Sri Lanka is to achieve durable peace, security, sustainable development and prosperity for all.

So it was in this background, that just last night, the Cabinet of Ministers, in keeping with the mandate and vision of our Government to promote and protect the human rights of all citizens and ensure non-recurrence, took an extremely important and decisive step to sign the International Convention for the Protection of All Persons from Enforced Disappearance, which demonstrates the seriousness of which the Government considers this issue. In keeping with this decision taken last night, Sri Lanka’s Permanent Representative in New York will today, I believe this morning in New York, will sign this  Convention. In fact, the Cabinet of Ministers also authorised the Legal Draftsman to undertake the drafting of necessary legislation to give effect to the provisions of the Convention, and the ratification of the Convention once enabling legislation is passed by Parliament, which we hope to do in January next year.

In fact, we all know that this is an issue that has plagued and pained our nation for long years. All, irrespective of race, religion, language or geographic location, have been affected by this crime for several decades, even in situations that are unrelated to conflict or unrest. The criminalization of enforced disappearance will provide protection to each and every citizen of this country and will help ensure that the terror of the White Van culture does not reign in our society ever again.

We must also remember that the alleged opposition between security and human rights is also a false one. The right to life, the right to live without fear, the right to seek the protection of the law are all human rights. But so is the right to freedom, the right to non-discrimination and the right of self-expressions. These rights, for the most part, complement rather than contradict each other. And where there is a tension,  the rights need to be balanced to ensure that each and every citizen can live a flourishing and full life.

And, we all know that there can be no lasting peace, no prosperity in our land unless all enjoy freedom and justice as equals. Therefore, we must, as a nation, dedicate ourselves, to not resort, as in the past, to defending the human rights ‘records’ of our Governments but to instead stand up always to defend human rights as a mature and responsible nation. Stand up, speak and act at all times in defence of the human rights of all our citizens. This, I believe,  is in our own interest as a nation and there is no need to be defensive about granting to our people, the rights which are due to them. There is no need to fear having a frank and honest dialogue with human rights defenders and UN Special Procedures or our bilateral partners. Engagement makes us stronger. President Maithripala Sirisena and Prime Minister Ranil Wickremesinghe have shown us the way. This is not a partisan issue. Strengthening human rights must receive the support of all, including all in Parliament. Related legislation must not mistakenly be viewed as partisan. Human rights is something that must be considered at a supranational level. Upholding rights, putting in place due legislation, strengthening the rule of law, establishing the independence of related institutions including the judiciary will benefit all, each and every individual, beyond party politics, beyond race, religion or creed.

Upholding human rights at home, I feel, also enables us to credibly point towards injustice and oppression in the world. In fact, Sri Lanka was once a country that was able to call on the world’s conscience – raising issues that affected the populations of the entire developing world on the world stage. If we are to regain that position and act as a voice and inspiration for others around the world, we must ensure that human rights at home are protected and secure.