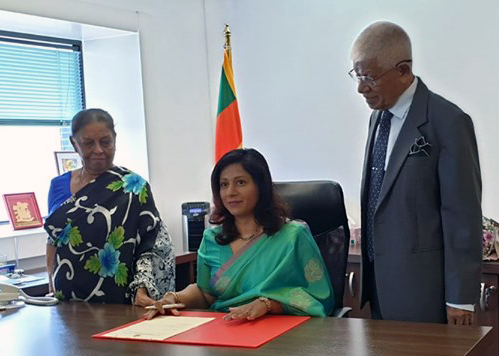 The newly appointed High Commissioner-designate of Sri Lanka to the Republic of Singapore, Sashikala Premawardhane assumed duties at the Mission on 24th June 2019.

Her assumption of duties was marked by a simple ceremony that began with the lighting of traditional oil lamp, followed by religious observances and chanting of Pirith by Maha Sangha.

Speaking on the occasion, High Commissioner-designate Sashikala Premawardhane set out her plans for strengthening bilateral relations between Sri Lanka and Singapore, and emphasised the need for vigorous promotion of trade and investment between the two countries.

High Commissioner-designate Premawardhane joined the Sri Lanka Foreign Service in 1998, and served as Director General, Policy Planning and Research of the Ministry of Foreign Affairs of Sri Lanka, a position she held from January 2019 onwards. She also served as the first Director General of Ocean Affairs, Environment and Climate Change from March 2017 to January 2019.

Her appointments in Colombo also include a secondment at the Ministry of Defence as Senior Assistant Secretary (Foreign Affairs) as well as several key appointments in the Foreign Ministry including Director/United Nations, Multilateral Affairs, Human Rights and Conferences, Director/Technical Cooperation, and Deputy Director/Economic Affairs.