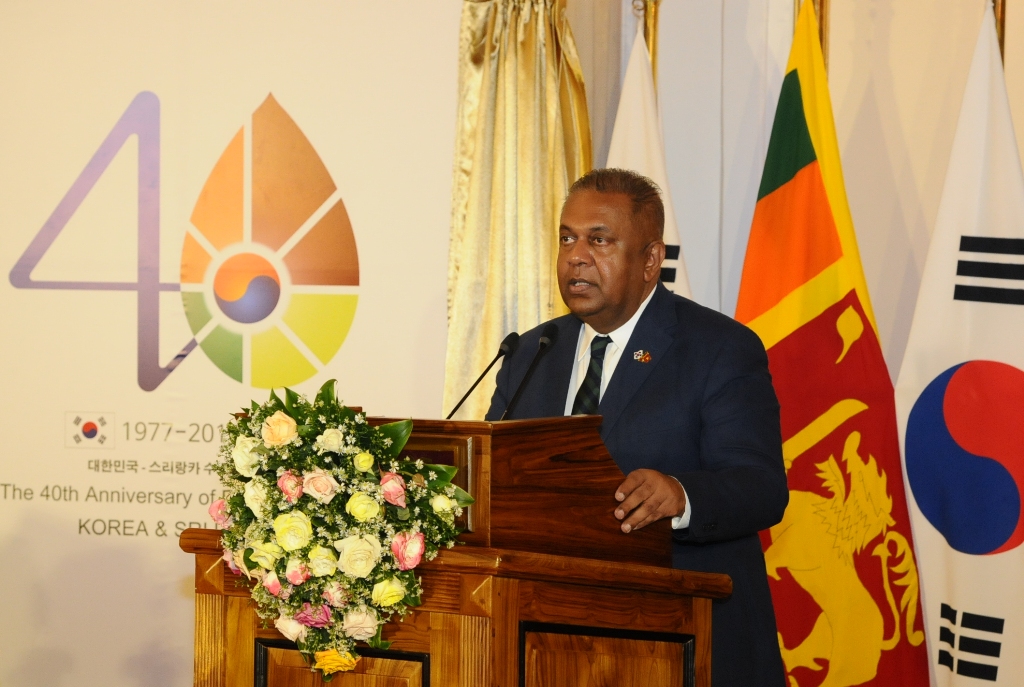 Your Excellency Yun Byung-se, Minister of Foreign Affairs of the Republic of Korea,

H.E. Chang Won-Sam, Ambassador of the Republic of Korea,

I recollect my own visit to the Republic of Korea last March when I held fruitful discussions with Foreign Minister Yun and enjoyed his warm hospitality.

I am confident that this visit by H.E. Yun will further enhance the warm and friendly relations between our two countries, and pave the way for stronger ties in all spheres of cooperation.  This is particularly so when Sri Lanka and the Republic of Korea are celebrating the 40th anniversary of the establishment of diplomatic relations this year.  I am pleased to observe that many activities are planned by our two countries to mark this important milestone, which included the official launch of the 40th anniversary logo today.

Foreign Minster Yun and I just concluded productive discussions on ways and means of further enhancing our bilateral cooperation in areas of mutual interest, including political relations, economic cooperation, development cooperation, labour relations, defence and cultural cooperation, as well as cooperation in regional and multilateral fora.  Particular attention was paid to ways and means of further strengthening our bilateral trade and investment partnership, given the potential and Sri Lanka’s location advantage.  Ongoing collaboration on the Megapolis and Western Development Plan was also discussed.

We also discussed the situation in the Korean peninsula and regional security issues. I take this opportunity to call upon DPRK to abide by its international obligations, ensuring a conducive environment for peace and security in the Korean peninsula.  We agreed to consult and cooperate on issues of mutual interest. I apprised Foreign Minister Yun on Sri Lanka’s process of reconciliation which is ongoing. We welcomed the early conduct of the next round of Policy Consultations between the two Foreign Ministries in Colombo.

I expressed my deep appreciation for Korean development assistance with grant and loan assistance offered through the Korea International Cooperation Agency (KOICA) and the Korea Exim Bank Economic Development Cooperation Fund (EDCF), which form an important dimension of our bilateral relationship. We are also thankful to KOICA volunteers for their services in Sri Lanka.

Sri Lanka is deeply grateful for the decision by the Government of the Republic of Korea to increase its EDFC development assistance from the existing 300 million dollars to 500 million dollars over the next three years. Also, I have expressed our sincere gratitude to the Government of the Republic of Korea for its generous gesture of 200,000 dollars humanitarian assistance in kind for the drought relief as the hand of friendship to Sri Lanka at this time of need.

I also conveyed Sri Lanka’s deep appreciation to the Korean Government for employment opportunities granted to Sri Lankan migrant workers under the Employment Permit System (EPS), which makes a significant contribution to the respective economies of our two countries.  Today, we discussed ways and means of further strengthening our labour cooperation to provide even greater opportunities for Sri Lankan workers.

I welcomed the opportunities extended by the Korean Government to Sri Lankan students in the field of higher education, including through the provision of scholarships, and discussed ways of further expanding cooperation in this sphere.

Sri Lanka deeply values the longstanding friendship and cooperation with the Republic of Korea.  The histories and cultures of our two countries in Asia are enriched with Buddhist links which span 15 centuries or more.  The celebration of the 40th anniversary of diplomatic relations this year has received momentum today with the visit of H.E. Yun.

I wish Minister Yu Byung-se and his delegation a very pleasant stay in Sri Lanka.