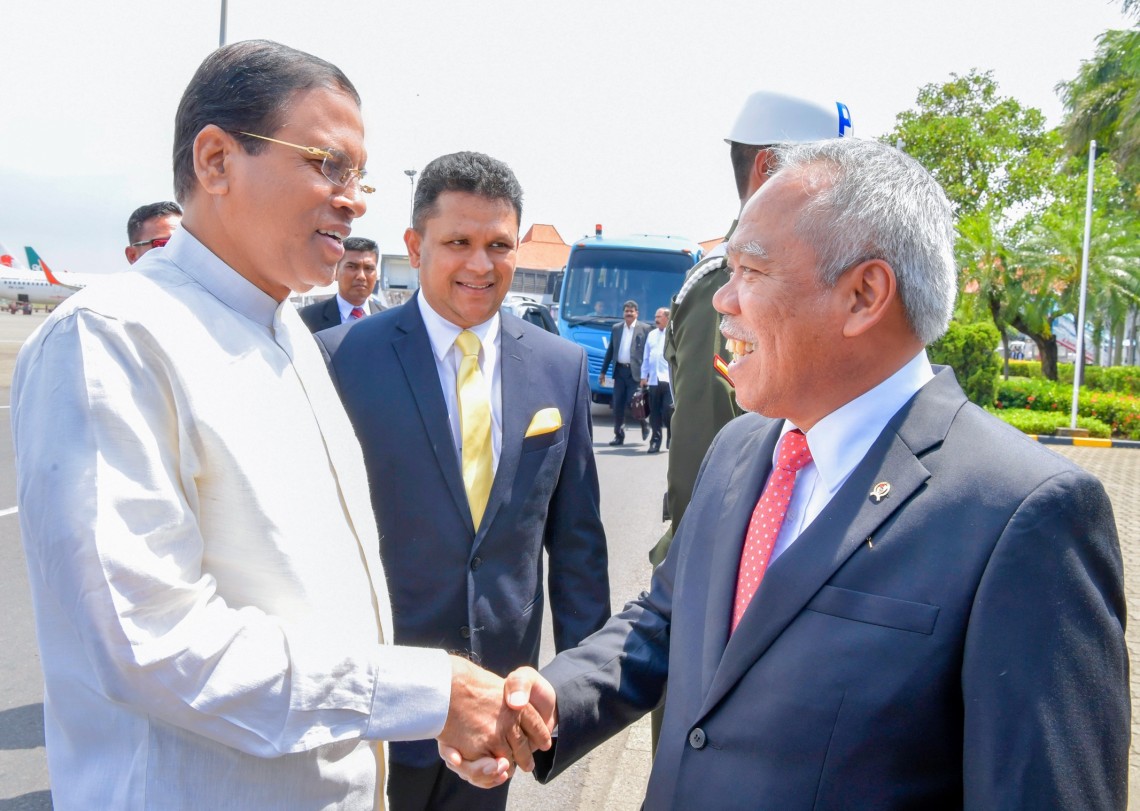 State Visit of President Maithripala Sirisena to the Republic of Indonesia

President of Sri Lanka H.E Maithripala Sirisena undertook a State Visit on 08th March 2017 to the Republic of Indonesia on an invitation extended by the President of Indonesia H.E Joko Widodo. The welcome at the historic Merdeka Presidential Palace included a Ceremonial Parade with 50 traditional troops, a twenty-one (21) Gun Salute, National Anthems, Guard of Honour and greetings by children waving the Sri Lankan flags.

The State Visit to Indonesia takes place after 41 years since the visit of then Prime Minister (Mdm)Sirimavo Bandaranaike in 1970.

The Leaders engaged in a tete a tete at the Veranda of the Palace – the traditional venue of the tete a tete followed by the bilateral meeting between the Leaders and joined by the respective delegations.

The bilateral discussions covered the full range of sectors which straddle the relationship featuring economic cooperation such as trade and investment, political, social, cultural matters, regional security, tourism, marine and fisheries, agriculture etc. Special emphasis was placed on working towards a Bilateral Free Trade Agreement (FTA). Following a further exchange of views, it was agreed that the Foreign Ministers take forward the outcome of the bilateral discussions.

The President of Sri Lanka congratulated Indonesia for the successful conclusion of the first-ever IORA Leaders’ Summit. President Widodo thanked the President for his participation at the Summit.

President Sirisena thanked Indonesian President Widodo for the recent donation of 5000MT of Rice gifted to Sri Lanka to overcome the shortfall which is seen as a gesture of goodwill in time of special need.

Having being briefed by Foreign Minister Mangala Samaraweera on the reconciliation process under way in Sri Lanka focused on democracy, reconciliation and development, President Widodo expressed Indonesia’s fullest support for the manner in which the process has been taken forward by the Government of Sri Lanka.

President Maithripala Sirisena extended an invitation for President Joko Widodo to undertake a State Visit to Sri Lanka at an early date. Upon an invitation extended during the talks, Indonesia is expected to send a delegation to the commemoration of the International Vesak Day in May this year.

Two Memorandums of Understanding on Marine and Fisheries Cooperation and Cooperation between SEMESCO of Indonesia and NCC Sri Lanka were signed during the visit and a Joint Communiqué on Illegal, Unreported and Unregulated (IUU) was adopted.

Media Statements were delivered by the two Leaders. In his statement, the President conveyed warm greetings of the people of Sri Lanka to the people of Indonesia and observed inter-alia his conviction that this visit would lead to a new and more fruitful chapter in the long standing relations between the two countries.

The Sri Lankan community in Indonesia gathered at the Chancery on the day of his arrival (06th March 2017) for an interaction with the President where he addressed the gathering. To commemorate the historic visit, a “Na” (Mesua Nagaserium) sapling especially flown in from Sri Lanka was planted by the President at the Embassy premises.

President Maithripala Sirisena joined other IORA Leaders at the first ever IORA Leaders’ Summit held on 07th March 2017 and addressed the Plenary Sessions. He also signed the IORA Concord with other Leaders attending the Summit. The Summit was preceded by the IORA Council of Ministers (COM), the delegation to which was led by Foreign Minister Managala Samaraweera and the Committee of Senior Officials, earlier.