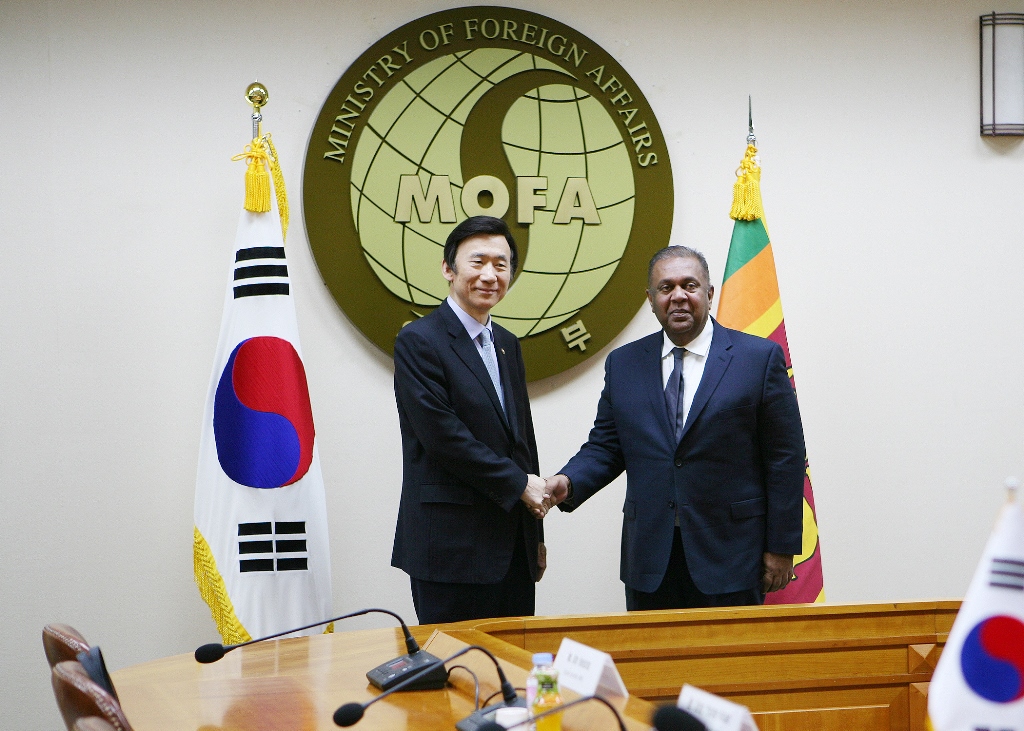 During bilateral discussions, the two Foreign Ministers underscored the importance of Sri Lanka – Korea relations which are longstanding.  They also discussed the further consolidation of bilateral ties, including the exchange of high-level visits, in the context of the 40th anniversary of diplomatic relations scheduled for 2017.  Minister Samaraweera underscored the interest of Sri Lanka to broaden and deepen economic relations with RoK, with particular emphasis on investment and trade.

Minister Samaraweera welcomed the goodwill demonstrated by RoK towards the Sri Lankan Government and towards its endeavours to consolidate democracy, reconciliation and development.  He elaborated on the process of transitional justice currently implemented through a national consultative procedure to achieve comprehensive reconciliation.  The Minister also commended RoK for its proactive engagement in multilateral fora, including holding the current Presidency of the Human Rights Council.

Minister Samaraweera informed Minister Yun that Sri Lanka remains concerned by recent developments in the Korean Peninsula, and has joined the international community in condemning Democratic People’s Republic of Korea’s (DPRK) recent nuclear test and launch of a long range missile.  He added that Sri Lanka has further called upon the DPRK to abide by its international obligations and desist from any action that would adversely impact on the peace and security of the Korean Peninsula in particular, and the world in general.

Minister Samaraweera emphasised that as per the Government’s economic policy framework focused on promoting investment and exports, integration in global value chains, and creating a knowledge economy, RoK has emerged as a country of prime focus with which to further expand economic ties. The two Ministers agreed to strengthen economic cooperation, and Sri Lanka looked forward to the early conclusion of the proposed Agreement on Economic, Commercial and Technical Cooperation to further enhance bilateral economic engagement.

The two sides welcomed the decision to hold bilateral political consultations between the two Foreign Ministries at an early date.  Minister Samaraweera expressed his Government’s deep appreciation to the Korean Government for the Official Development Assistance (ODA) extended to Sri Lanka through the Economic Development Cooperation Fund (EDCF) of the Korea EXIM Bank, and the Korea International Cooperation Agency (KOICA), which form an important dimension of the bilateral partnership.  Minister Yun reiterated his Government’s continued commitment to support Sri Lanka through development cooperation.

Minister Samaraweera expressed the Government’s appreciation for the opportunities in tertiary education offered to Sri Lankan students by the Korean Government, and discussed ways and means of further strengthening cooperation and collaboration in the fields of education; science, technology and innovation; and culture.  The two sides also welcomed cooperation under the ‘Saemaul Undong’ Programme or the ‘New Village Movement’ to support Sri Lanka’s sustainable development.  The Foreign Minister and delegation were also hosted to a luncheon by the Korean Foreign Minister.

At meetings with the Korean Foreign Minister and the Minister of Employment and Labour Lee Ki-Kweon, Minister Samaraweera expressed Sri Lanka’s deep appreciation to RoK for the employment opportunities granted annually to Sri Lankan workers.  He referred to the 25,000-strong Sri Lankan worker community in RoK, whose contribution and remittances have a significant positive impact on the economies of the two countries.  Ministers Samaraweera and Atukorale, among other issues, conducted productive discussions on the annual quota of employment granted to Sri Lanka under the Employment Permit System (EPS), issues with regard to workers in the fishery sector, as well as safeguarding the welfare and benefits of Sri Lankan workers, and enhancing their competencies and training opportunities.

At the meeting with the Korean Minister of Land, Infrastructure and Transport Kang Ho-In, Minister Samaraweera welcomed investment by reputed Korean companies in the development drive in Sri Lanka in technology driven sectors, including in the Western Megapolis Development Plan which will also serve as a blueprint for future development.  The Korean side reciprocated interest in investment in key sectors in Sri Lanka.  Minister Samaraweera also briefed his interlocutors on the concrete steps taken by the Government in making the investment climate more favourable.  Referring to the Korean investment and business delegation that visited Sri Lanka to participate in the recently concluded ‘Sri Lanka Investment and Business Conclave 2016’, the Minister welcomed greater engagement between the Chambers of Commerce and Industry of the two countries to further enhance trade and investment opportunities.

At a meeting with the President of KOICA  Kim Young-Mok, Minister Samaraweera expressed his sincere appreciation for the grant aid and technical cooperation extended by KOICA towards priority sectors of development, which has generated long-lasting goodwill.  He also appreciated the support provided in terms of capacity building through the KOICA Fellowship Progamme, and the work of KOICA volunteers who are effective cultural ambassadors.  KOICA support towards Sri Lankan migrant workers, including training opportunities and reintegration on return to home country, were also discussed.

Sri Lanka’s Ambassador to the Republic of Korea Manisha Gunasekera, Additional Secretary of the Ministry of Megapolis and Western Development Madhawa Waidyaratna, Director East Asia & Pacific of the Ministry of Foreign Affairs Savitri Panabokke, Chief of Staff Ransiri Perera, Acting Manager of the Sri Lanka Bureau of Foreign Employment K.S. Pushpakumara, and senior officials of the Sri Lanka Embassy in Seoul were associated with the Ministers.