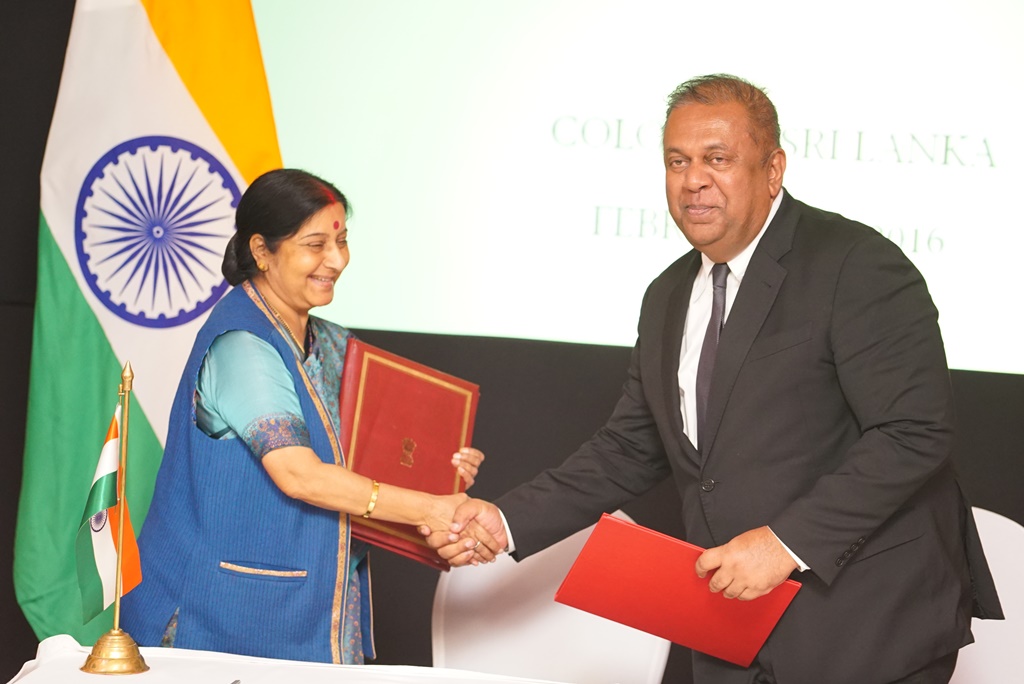 The 9th Session of the Joint Commission was Co-Chaired by Minister Mangala Samaraweera and Smt. Sushma Swaraj on 5th February 2016.

Matters relating to cooperation in the fields of Economic & Trade, Power & Energy, Social Cultural and Education, Science & Technology, Agriculture, Defence, Fisheries and Health were discussed at the 9th Joint Commission. Secretaries and officials of relevant Ministries and line-agencies attended the meeting.

The Joint Commission emphasized the importance of private and public sector participation in economic and trade cooperation and reviewed the progress of the Free Trade Agreement (FTA) and the proposed Economic and Technology Cooperation Agreement (ECTA). The need to encourage investors of both countries to pursue joint ventures was also noted.

The upward trend in the two-way traffic in the tourism sector was noted with satisfaction and the progress of the proposal to promote the Ramayana Trail and the extension of the Buddhist Circuit Trail was reviewed. The resumption of ferry services at an early stage was emphasized. It was noted that there is an interest in commencing a Cruise Service between Colombo-Cochin-Male.

The Joint Commission elaborated on the progress made in the power and energy sector and agreed for closer engagement in these sectors. The Renewable energy sector has been identified for potential investment and collaboration.

Discussions also focused on railways, development assistance in housing, healthcare and services, education, university infrastructure, livelihood, rehabilitation and resettlement and agreed to pursue closer collaboration in these segments. Sri Lanka made a request to India to consider new projects under the Small Development Project (SDP) model.

Matters pertaining to Education and Science and Technology were discussed and the two sides agreed to maintain closer links in these sectors. Capacity building through training opportunities, sharing of expertise, transfer of technology and research studies including in Nano-technology and Space Sciences were identified for further collaboration.

The Joint Commission will look at facilitation of voluntary return and repatriation of Sri Lankan refugees from India.

On the issue with regard to fisheries, Sri Lanka brought to the attention of the Indian side the concerns of Sri Lanka on environmentally destructive methods and the poaching issue. The Joint Commission highlighted the need to identify innovative solutions on this important matter.

In order to strengthen links between the elected representatives of both countries, Sri Lanka welcomed the invitation from the Bureau of Parliamentary Studies and Training of India for a visit by Sri Lankan Parliamentarians to India in March 2016.

The Minister of Foreign Affairs of Sri Lanka accepted the invitation extended by the Indian Minister of External Affairs to visit India in February 2017 for the next Joint Commission meeting to be held in New Delhi, for which convenient dates could be mutually worked out through diplomatic channels.

The Agreed Minutes of the 9th Sri Lanka-India Joint Commission were signed by the two Ministers at the end of the discussions.

Memoranda of Understanding for two projects under grant assistance by the Indian Government, for the renovation of 27 Schools in the Northern Province and the construction of a Surgical Unit and supply of necessary medical equipment to the Teaching Hospital in Batticaloa, were signed following the Joint Commission discussions.

The Indian Minister also attended the exhibition “Rise of Digital India” held at the BMICH on 6th February.

The 9th Joint Commission and the visit of Indian External Affairs Minister to Sri Lanka is another milestone in the bilateral relations that would further strengthen the close ties between the two countries.