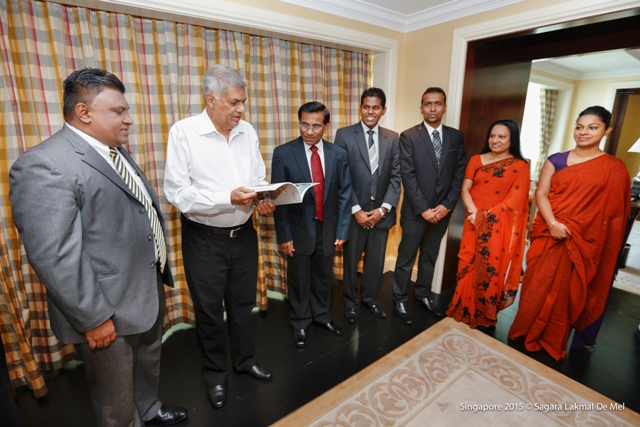 The first issue of "Sadisi" Magazine published by the High Commission of Sri Lanka in Singapore was offered to Hon. Ranil Wickremesinghe, Prime Minister of Sri Lanka on 17th October at the Shangri- La Hotel, Singapore, during the Hon Prime Minister’s visit to Singapore.

"Sadisi" is a magazine which aims to promote Sri Lanka as a lucrative destination for investment, tourism and culture in Singapore. In addition, the focus of the magazine is to publish mission activities and news articles on current affairs of economic, business and political importance. Furthermore, the magazine is expected to provide the opportunity for Sri Lankan expatriates in Singapore to elaborate their success stories, with a view to inspire readers along the same lines.

The magazine launch event was attended by Mr. Saman Ekanayake, Secretary to the Prime Minister and Mr. Nimal Weeraratne, High Commissioner-designate of Sri Lanka to Singapore, Mr. Wishwanath Aponsu, the Acting High Commissioner, Chief Editor and other Editors of the Magazine.

The final remarks were made by Ms. Savithri Panabokke, Director, East Asia & Pacific of the Ministry of Foreign Affairs of Sri Lanka who thanked everyone who contributed in publishing the magazine.

The event was attended by around 100 guests from various institutions and the Sri Lankan expatriate community in Singapore and was followed by a cocktail reception. Free copies of “Sadisi”Magazine, published by the High Commission of Sri Lanka in Singapore were distributed among the participants at the end of the event.