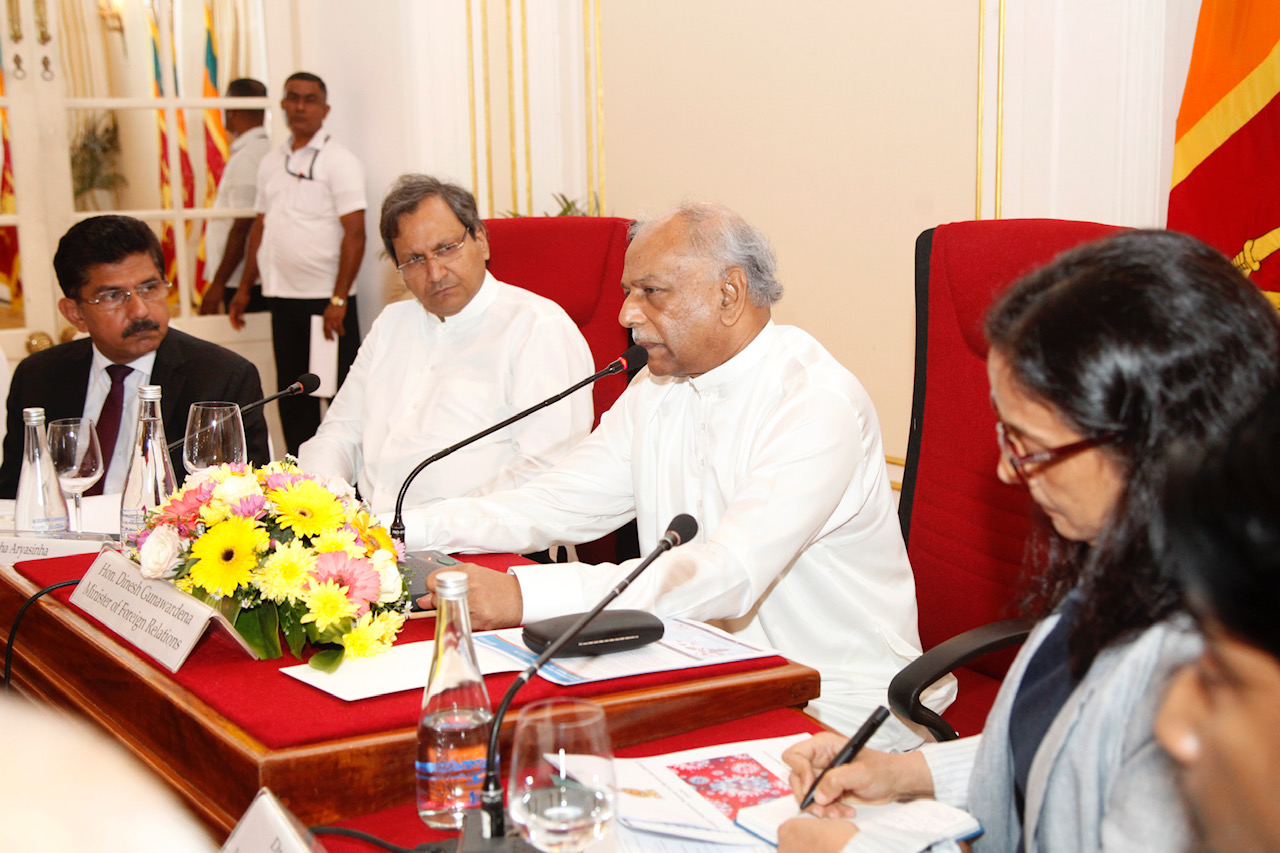 Minister of Foreign Relations Dinesh Gunawardena briefed the Diplomatic community on the situation of the COVID-19 epidemic and the preventive measures the Government of Sri Lanka contemplates taking. The Foreign Minister apprised that adequate preventive measures to curtail the transmission of the virus have been taken by the Government. While appreciating the role of the media he urged the media to be cautious in disseminating the correct information to the general public so as not to give into panic unnecessarily, whilst being agile to the dangers of the virus.

The panel headed by Foreign Minister Gunawardena included officials of the Ministry of Health, the Resident Representative of the World Health Organisation, IOM, Department of Immigration, Airport authorities  and officials of the Sri Lanka Army.

Foreign Secretary Ravinatha Aryasinha in his opening remarks informed Sri Lanka's preparedness and the resultant successful evacuation of Sri Lankan students from Wuhan. The Secretary appreciated the cooperation of the Chinese Government towards this end. He also said that no foreign national will be allowed to be discriminated on account of unfounded fear of the virus, a sentiment clearly expressed by President Gotabaya Rajapaksa and the Prime Minister Mahinda Rajapaksa. Foreign Secretary Aryasinha also stated that a few sporadic alleged incidents of selective treatment does not reflect the general situation in the country.

Director General of Health Dr Anil Jasinghe stated that the threat of COVID-19 has reached a level of public health emergency of international concern and as a result, the Health Ministry has embarked on a vigorous plan to strengthen the domestic health facilities. As an initial step, 17 hospitals across the country have been designated and well equipped to deal with the likely COVID-19 pandemic. The Director General also stated that since the situation is fluid, the COVID-19 case definition is also redefined and as of today, passengers from Iran, South Korea and Italy are considered to be potential carriers of the virus. The Government, as a precautionary measure has decided to quarantine those who are travelling either from or through the above mentioned three countries. The DG also confirmed that despite the decision to quarantine, the date of operationalisation of the plans are yet to be decided since the construction of quarantine facilities are underway.

Resident Representative of the WHO Dr Razia Narayan Pendse highlighting the gravity of the situation across countries, pointed out that a combined Government and society approach is the need of the hour to manage any likely outbreak of COVID-19 in Sri Lanka. She added that an inter-agency collaborative approach to reverse any adverse situation is critical at this point of time. Dr Pendse said she could clearly witness the much needed political will, and the multi-sectoral collaboration and cooperation, which have been prevalent so far towards resolving the challenges. The Representative was appreciative of the roles of the authorities of Foreign Relations, Health, Defence and Immigration and stated that educating the general public, expansion of surveillance, and strengthening of preparedness are important aspects to interrupting the transmission of the virus.